June 22: Stanley Park Drive is being divided into one lane for cars and one lane for cyclists, and cyclists are to use that instead of the seawall. Note that there is a big hill going up to Prospect Point that some will find to be too much, and they can shorten their ride by taking Pipeline road (just before the climb) home. See the notice. The following information has been roughly modified to account for this, but will be properly updated in time.

A park named Stanley. Nobody calls it “Stan.”

The Stanley Park seawall is a long ride at almost 9 kilometers, but it’s also very flat so it’s not too strenuous (due to Covid restrictions, the long ride now goes up to Prospect Point on a steep and nasty hill, though you can take Pipeline Road home instead for a shorter, but still fairly flat ride). There are many opportunities to stop and enjoy the view, sit in the sun, or do a little exploring, and if it does become too much, there are a few places where you can cut through the park to shorten your ride.

The Stanley Park seawall is a one-way-only separated path for cyclists, from Coal Harbour counter-clockwise to English Bay. 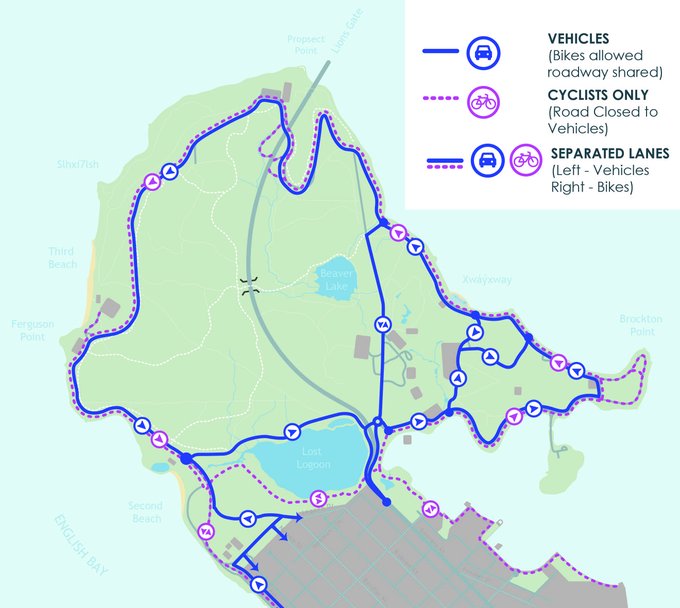 Brockton Point provides one of the best views of Vancouver Harbour and the North Shore mountains. Just before Brockton Point (and just after) you will see playing fields, a running track, and totem poles across the road. These playing fields were among the first built by residents of Vancouver, but were much too far out of town though forest trails or by boat to be first choice.

On weekends you may even see a cricket match, and you’re welcome to stop and watch. There are washrooms at the club house, the totem poles, and at the running track.

There are more washrooms at Lumberman’s Arch and also up the path at the Aquarium, but the next washrooms after that are some distance away at Third Beach, though if you go up the hill to Prospect Point there are washrooms there, too.

There is a long middle stretch between Lion’s Gate Bridge and Third Beach where you can’t get off because of the cliffs and you can’t turn back because it’s one way – and so is Stanley Park Drive above. This is closed for now, and the detour goes up that aforementioned steep hill to Prospect Point. If you decide you don’t want to continue, there are a limited number of ways before Lion’s Gate to cut your circuit short:

Well around the seawall to the south side, Third Beach has a concession stand up the stairs. You can get food and use the washrooms, or buy an ice cream from the cart at the beach in summer.

Second Beach – almost at the exit of the park also has a concession with a larger range of items and also washrooms. Second Beach features a large outdoor salt water pool.

If you need information about Stanley Park, check out www.StanleyParkVan.com.

Alternate: Behind the concession at Second Beach Stanley Park Road splits with one fork – North Lagoon Drive – going behind Lost Lagoon to return to the beginning of the park and Coal Harbour. While you can take this road to return to the city, you can pretty much take any upcoming road or path that goes in the right direction. There is a bike path to the right of North Lagoon Drive that you can follow across the little stone bridge and to the east side of the lagoon to go to Coal Harbour.

East: Following along the cycle path behind Second Beach, go right around Ceperley Park and follow the path’s rise above the shore and into the West End and English Bay (First) beach. If you duck under the road where the path turns in Ceperly Park you can alternatively connect with the path heading to Coal Harbour.

In the winter season there may be ice and flowing runoff on the pathway between Lion’s Gate and Third Beach. It gets dark quickly and you do not want to be stuck on the unlit seawall on a moonless night. There is no shelter from rain.

The southern side of the park, on English Bay, is exposed to the weather coming from the west. Rain is bad enough, but high winds from fall to late spring can get you wet from sea spray and it can be difficult to control your bike or make headway in a strong wind. Your lower gears (smaller front ring, especially) will make it easier and give you more control.

There was a small native community (X̱wáýx̱way or “Whoi Whoi”) at Lumberman’s Arch, and dwellings at “Chaythoos” where the seawall meets Pipeline Road – just before the footings of Lion’s Gate Bridge.

There were native burial grounds on Deadman Island (HMCS Discovery) and in at least one case, near Prospect Point.

It was from the area of Stanley Park that the natives paddled out to greet and impress Captain Vancouver in the late eighteenth century as he came up the Inlet exploring.

The peninsula was designated as a naval reserve in the 1860s to provide protection for the city of New Westminster from attack from the USA. The city asked the federal government to lease the land to them for a park in 1886.

Deadman Island and the area above Brockton Point provided an unconsecrated burying place for foreigners who died far from home until a municipal cemetery was opened in 1887. Deadman Island was also a quarantine place for victims of a smallpox epidemic.

Stanley the Park used to have residences – “squats” officials claimed – along the water, mostly before Brockton Point. If you look on the shore line there, you might see some faint remnants. The buildings belonged to pioneering settlers who settled along the shore long ago. They had their rights, but nevertheless, they were in the way of the development of the park. They were all strong-armed, bamboozled and finagled out of there.

Not all of them were strong-armed, bamboozled and finagled. The Hawaiian community which lived at the entrance to the park at the base of Denman Street sold their rights handsomely.

This site uses Akismet to reduce spam. Learn how your comment data is processed.

Coronavirus Q&A: is it safe to cycle?

How to Ride Safely Amid Coronavirus Concerns

Scroll back to top